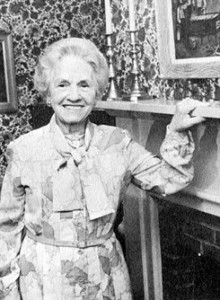 Emma Serena “Queena” Stovall was born in 1887 in rural Amherst county Virginia. She was nicknamed Queena because it was easier to pronounce then Emma Serena. When Queena was 9 her father died and the family moved to Lynchburg, then a town of about 18,000. Queena attended high school but left early to go to work. At age 19, she married a promising businessman some 14 years her senior, and the couple had 8 children. She started painting at age 62, when she was already a great-grandmother. Queena is a Southern memory painter, who often portrayed her black neighbors as well as her own family. When she died in June of 1980 she had completed only 47 paintings.